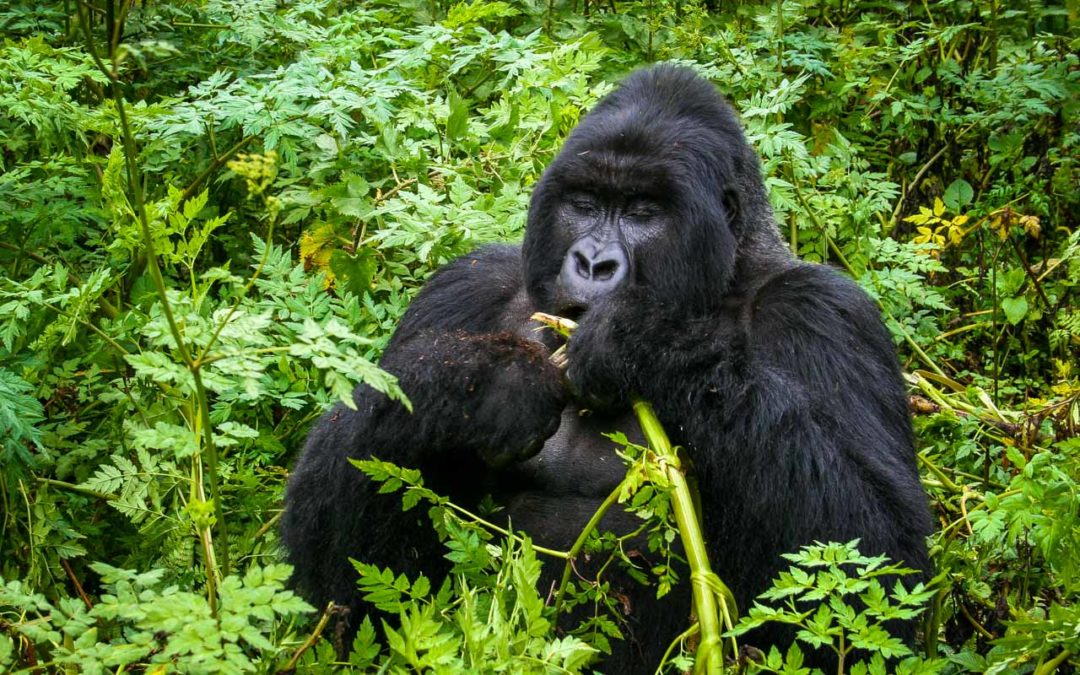 Mountain gorillas live in Rwanda, Uganda and the Congo and although critically endangered, numbers have risen to around 1000 at the last census. This is undeniable proof that conservation efforts are certainly not in vain. Gorilla tracking is possible in all 3 countries. I did my trek in the Volcanoes National Park (Parc National des Volcans) in Rwanda. 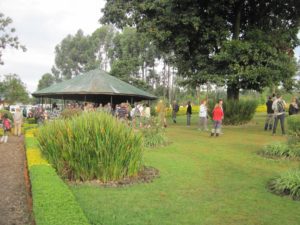 When we arrived at the Park HQ at around 7am it seemed a little disorganised. There were people everywhere, and some serious looking mountain climbers who made me feel like this was a bad decision. I felt rather underdressed in my hiking boots, khaki pants and a long-sleeved top. And, I had read the what to pack document before I left! Someone in my group wore converse type slip on shoes, so at least there was that. Most people were decked out in gaiters and even what looked like full swamp suits. I was pretty proud of myself for remembering to pack gardening gloves and boy did these come in handy! But more on that later.

There are 10 habituated gorilla families in Rwanda as well as two visited only for research. There are approximately a further 20 non habituated groups.  Only 8 people are permitted to track each group each day, meaning only 80 permits are available daily. Permits have to be pre-booked well in advance. You are allocated your gorilla family at the park headquarters on the morning of your trek based on your physical abilities and age. Whilst it is possible to request a specific gorilla family, it is not guaranteed that this is the one you will trek to and you would definitely need to request this ahead of time. If you are doing more than one trek, they will assign different families for each one. 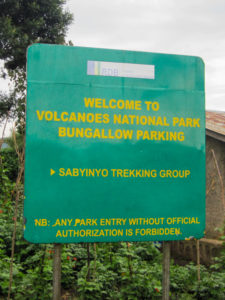 At about 8:30am after having some tea, many bathroom breaks (nerves and excitement) and being assigned our group, our guide took us with our permits to the starting point of our hike. This could be up to an hour drive away from the Park HQ.  Fortunately, we only had to drive about 15 minutes. It was at this point we met our actual ranger who was escorting us to meet our hairy friends. He gave us a briefing on the current status of the gorilla population and the threats they face. High on the list is poaching. Although many traps are intended for antelope, sadly gorillas do find themselves in the snares. Another concern is habitat loss due to deforestation and the encroachment of humans. He also told us all about the family we were going to see, the Sabinyo family which currently has 17 members.

It was here we also met the porters. I knew in advance that it is recommended to invest in the help of a porter. This is this their livelihood so it is a way of giving back to the community. But also regardless of how sure-footed you may think you are these guys will ensure your dignity is intact and you do not go tumbling down a hill. On first meeting my porter, Daniel, I was not convinced. He looked in the region of 75 years old and was exceptionally slight in build. I am a solid woman standing at 1.72m and trip over my own feet. I wasn’t quite sure how this was going to work out. Daniel whipped my backpack off my back and onto his, handed me a carved wooden walking stick, grabbed my hand, and we were off. There was no time for me to make any objections. I must mention that slip-on-shoes-guy who was wearing jeans and a button-down shirt, decided he did not need a porter. Any male readers considering a trip to see the gorillas, please don’t be macho, get a porter, it’s the right thing to do and the investment is 10 bucks plus a tip! 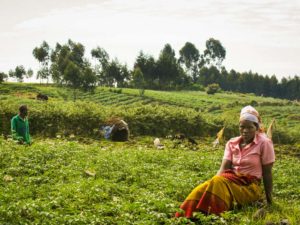 The walk started off as a mellow stroll through some potato fields. We passed by some friendly locals working the land before we got to the start of the bamboo forest were the location trackers were waiting for us. These men set out early in the morning to locate the gorillas based on where they slept the night before so along with the ranger they can lead you “straight” to them. This could take anywhere from 30 minutes to 4 hours. It was from here on in that the trek became a little more gruelling. It had rained the day before so the ground was muddy and slippery and the vegetation was dense. The trackers had machetes to cut out a path in front of us as there were none. But we still had to negotiate branches and plants out of our way and this is where the garden gloves come in. Grabbing said plants with your bare hands can result in all sorts of scratches, scrapes and a lot of itching. Even with the gloves and thick pants, I was viciously attacked by stinging nettles. The thrill of what you are about to witness and the odd thought of “what if I die?” masks any pain. We had to climb down a steep slope to get to our family who kept moving. (In case anyone thought they sit in one place waiting for the tourists to arrive). It was at this point that I realised I would not have made it without Daniel! It took us about 50 min to reach the group. 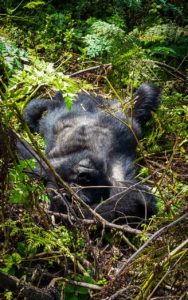 I cannot describe the way I felt when I saw my first gorilla. It was petrifying and magical and I immediately started to cry as I was so overcome with emotion and awe. As my eyes started adjusting to the thick foliage I began to make out more of them. Some were sitting eating and took no notice of us. A few blackbacks (8 to 12-year-old males) scampered around, chasing one another. Another lay stretched out on his back staring at the sky. I didn’t know where to look for fear of missing anything.  Our tracker taught us how to say “hello” in gorilla, to let them know we were there and by returning the greeting we would know that they were comfortable with our presence.

The Sabinyo family is led by the powerful Silverback, Guhonda who at 47 is the oldest gorilla in the world. He was not with the group when we came across them. But we soon heard his large grunts coming from up the mountain. One of his sons also a silverback, started grunting back to signal to him where they were. When he jumped down to join them the ground shook. Guhonda then proceeded to do the whole Tarzan, beating his chest with his fists move. This was one of the most surreal and terrifying things I have ever seen in my life. But he was not one bit interested in us. It was almost as if he was ignoring us on purpose. He strutted around chewing on his bamboo stalk and picking his teeth, before finding a comfy spot to sit down. The similarity in their mannerisms to humans is uncanny. Even though I was aware we share 98% DNA with them it was still fascinating to watch their facial expressions and how they interacted with one another. 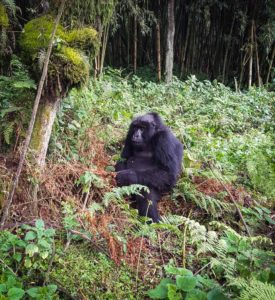 Another member of this group is Big Ben, born the only bald gorilla in the world. He was quite entertaining to watch, although I did feel a bit sorry for him. Kampanga one of the females had given birth to a baby earlier in the year. She is one of only 2 gorillas to have given birth to 7 babies, as the most is usually 6. We spent a fair amount of our allocated time watching this little cutie playing. He was very curious and kept coming closer and closer, but always retreated back to the safety of his mom who was keeping a watchful eye on him.

All too soon our 60 minutes were up and it was time to leave. We started making our way through an opening in the vegetation to begin the climb back up to the top. The Sabinyo family decided they too were ready to move on. And so about 10 minutes later we all had to crouch down and keep still as they came past us. Some of them actually brushing against us with their fur. It was priceless. We got to spend an extra 15 minutes observing them out of sheer luck as they decided to relocate.

The pure rush of adrenalin was what got most of us up the hill, that and of course Daniel pulling the likes of me up! Once on terra firma, I asked our ranger how our trek rated in terms of difficulty. We figured it must have been at least a 6 or a 7, even though it was a short hike, it was steep and pretty treacherous in our minds. He gave it a 2. Yes, that’s right a 2! But I was not about to let that dampen my spirits, I had spent over an hour with big, fat, beautiful, hairy gorillas. Few people get to say that in their lifetime!

It an absolute privilege to have met Mountain gorillas face to face in their natural habitat. I am aware it is a rare opportunity not bequeathed to the masses, and the experience truly humbled me. If you get the chance to go gorilla trekking, grab it with both hands, the cliché is true, it is life changing. 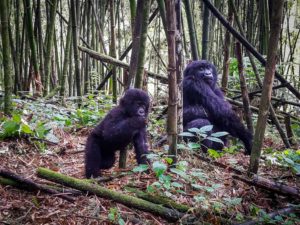